Under the name Rost & Borke (Rust & Barke), a new band, albeit partly made up of old hands, is embarking on a musical pilgrimage in search of the stuff with which your ears can be beaten up in the best possible metal way and manner. Having been inspired by numerous favourites such as Bathory, Asphyx, Black Sabbath, Bolt Thrower or Manowar – to name but a few – for years, they now want to get their own act together. And with the three-track demo “Afterlife” they already give an early impression of their seemingly very over-motivated abilities, which, however, benevolently show where the started journey could lead. The first track “On Defensive Shores” is already a decidedly oddball piece of music, with unruly guitar beats that nevertheless bump along in a recognisable pattern, with which the idea of a Rumpelstiltskin dancing around a fire is not far-fetched. No kidding, such unconventional sounds inevitably make you think of something strange like that, a goblin polka or a wild camel ride for all I care, because it’s more than obvious that you’re being offered some pretty unusual fare here, one that’s still a little different than different. But this is precisely what makes it as exciting as Sinbad’s adventure, while we’re on the subject of the bumpy camel ride. The second song “The Day I Died” hits the classic Death/Doom notch. Odrogath Da Vyr’s vocals (what a name! Definitely not off the peg!) come out much better in the laborious snail’s pace that prevails here. It is abysmally droning, in addition afflicted with a deathly pregnant overtone, naturally serving the song title, in order to transfer a slightly morbid nuance to the listener together with the sprinkling guitars. The title track is of a similar nature, but towards the end it travels on a guitar track reminiscent of Black Sabbath and co. All in all, “Afterlife” – not throwing the rumbling basement sound of a demo recording into the mix – is quite a charming affair that gives hope for a nice doom surprise in the near future. And nobody should object to a wild acoustic ride, right?

ROST & BORKE’s rumbling brings back memories of the early East German extreme metal underground, and indeed the band comes from the early nineties heroes Under Black Clouds (see Ars Metalli article in issue 414). “Afterlife” offers three times tough death metal with rehearsal room flair and completely unconventional song structures, which the relevant labels should give a wide berth to. All the more reason for veteran scene followers to rejoice in this sound that is completely out of time; the quartet, which was reshuffled after the recording, promises that this demo is just a prelude to something big, and as such it is a lot of uncommercial fun.

Afterlife” is available as a limited edition tape or CD-R from www.rostundborke.com 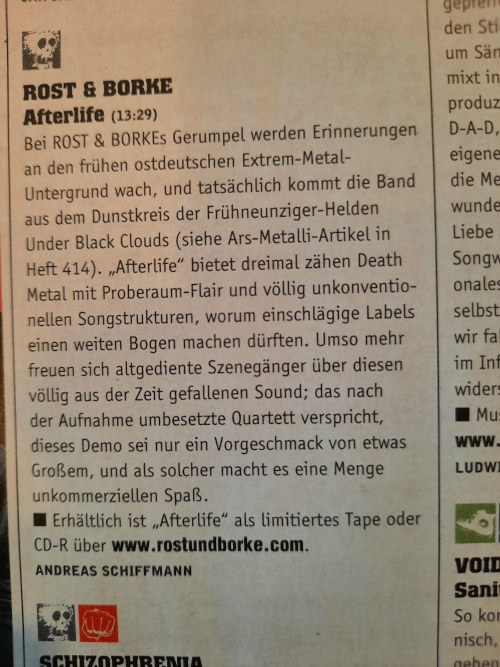 ROST & BORKE is one of the most unusual and promising band names I’ve come across in recent years. And not only the name and logo sound and look enticing. The artwork and the title “Afterlife” also arouse certain expectations and associations with unpolished doom, death or gothic metal of the 90s. So I just couldn’t and didn’t want to resist a review.

The band has its roots in Brandenburg and Thuringia and was founded in 2020. Officially, they have dedicated themselves to epic death and doom metal. Among the influences, a whole series of relevant top-class musicians and scene veterans appear in the band info. The demo “Afterlife” was recorded in May 2021 with a guest guitarist. In the meantime, only bassist Merula Turdus and singer Odrogath Da Vyr are part of the recording line-up. A new record is in the works.

But back to “Afterlife”.

My high expectations were confronted with reality quite rudely after the first notes and beats. The reality of a wannabe writer in his mid-forties who, out of insight (?) and self-knowledge (?) about his own musical abilities, has traded in pens and microphones for pens and keyboards and asks himself on the first run-through whether a demo like “Afterlife” really needs to be released in times when the underground is overflowing with uncut diamonds from countless bands, let alone should be. The opener “On Defensive Shores” is a dirty uptempo stomper with a rock ‘n’ roll edge, which, apart from the leads, scores points with Odrogath Da Vyr’s throaty growls. The sound has more of a rehearsal character and is as unpolished and raw as it is undifferentiated and mushy. The creaky bass of Merula Turdus, which plays a leading role on all three tracks, stands out. At first you have to cope with the rather abrupt end of “On Defensive Shores”. It comes almost without warning and raises the question of whether this was an accident, a technical error or actually intended? But there is no time for irritation. “The Day I Died” sneaks slyly through the undergrowth and is up to no good. It’s better to avoid this sonic infamy, not only because of Odrogath’s less convincing and somewhat weak croaking vocals. The closing title track “Afterlife” is once again dragging and comes along worn, but it comes up with an almost devotional and hymn-like atmosphere.

Somehow I don’t recognise a clear line and actually this demo would almost be predestined for a classic review. “Afterlife” seems” to me objectively musically dispensable and unessential in every respect. However, the almost naïve conviction to simply put out something so imperfect again commands my respect. It takes me back to a time when a twenty-year-old metal head spent more time in rehearsal rooms, clubs and pubs on and in front of stages than in his first own flat. The big wide metal world had only been waiting for us and was at least open to us at concerts, filthy, smoky, dripping with sweat and with what felt like 6.66 per mille on the kettle. ROST & BORKE embody this charm for me on “Afterlife”. It shows dedication, maybe even overconfidence, but also attitude, which means much more to me in this form than an overpriced, dead-produced, musically just as irrelevant picture single by Amon Amarth….

Only Tape Is Real!!! 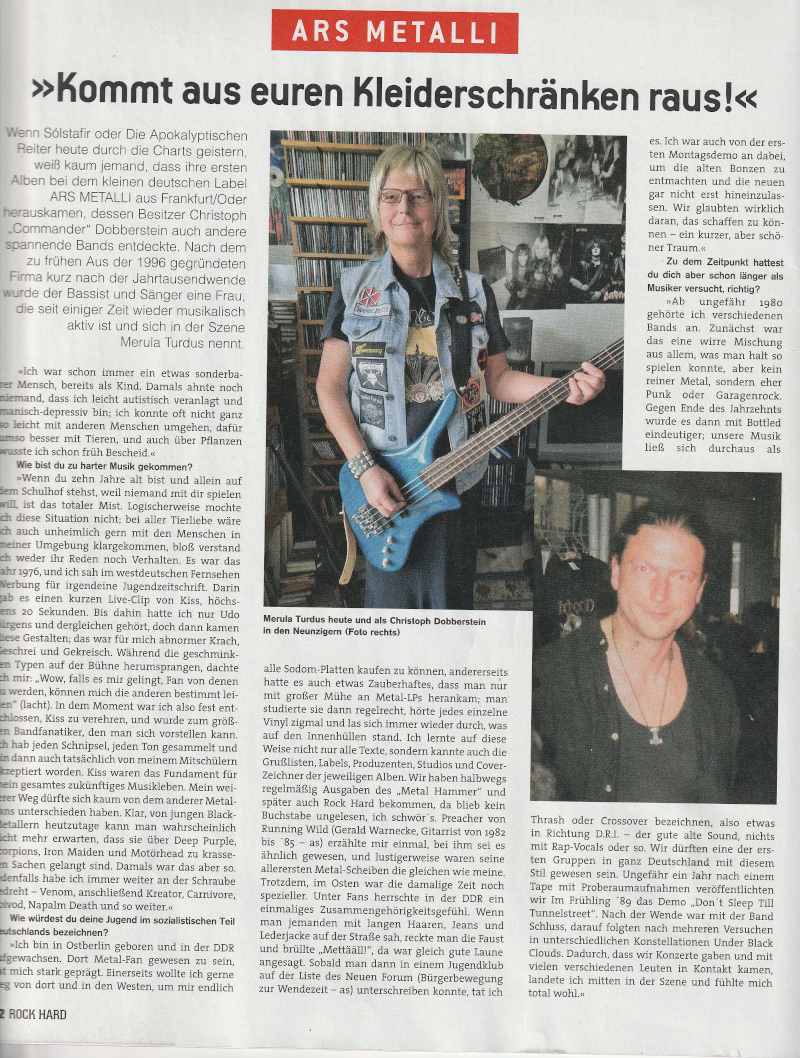 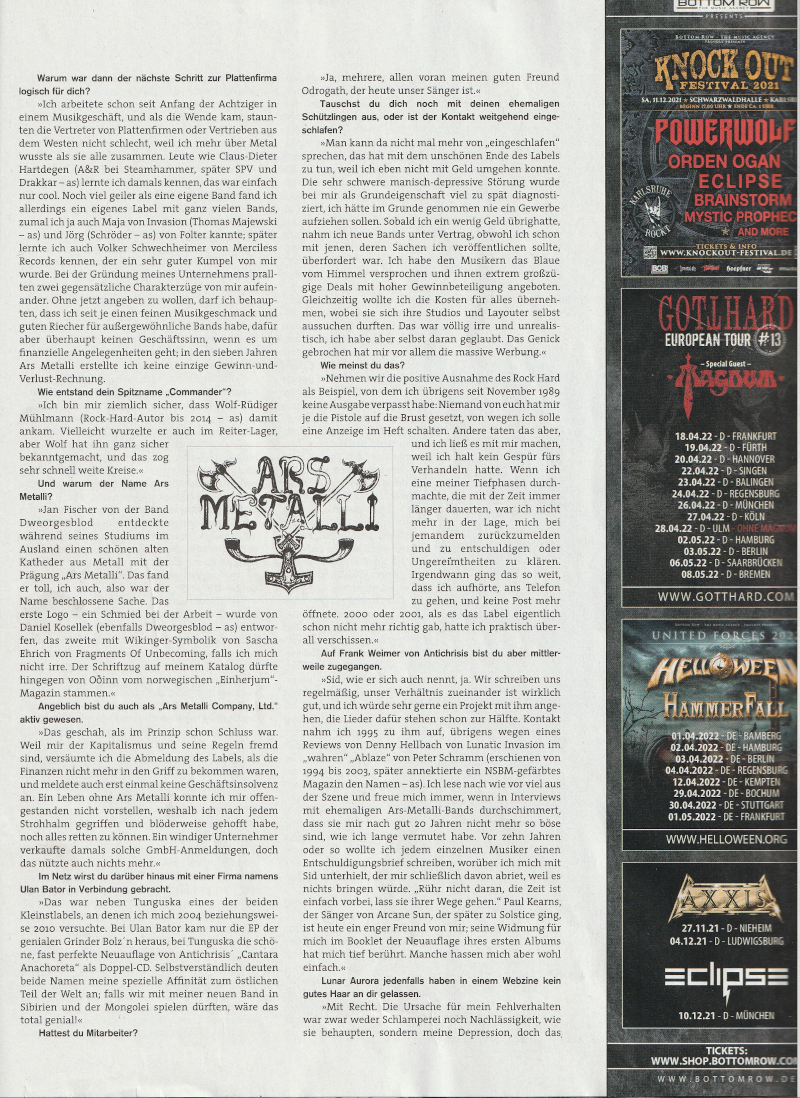 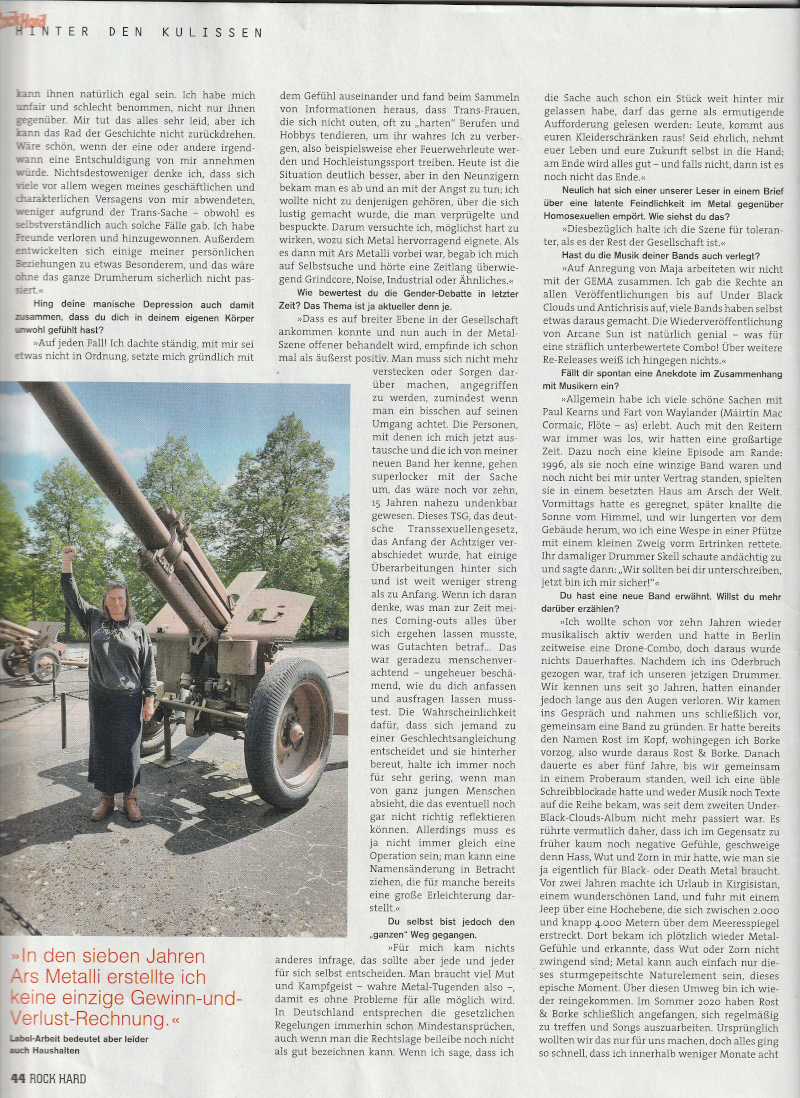 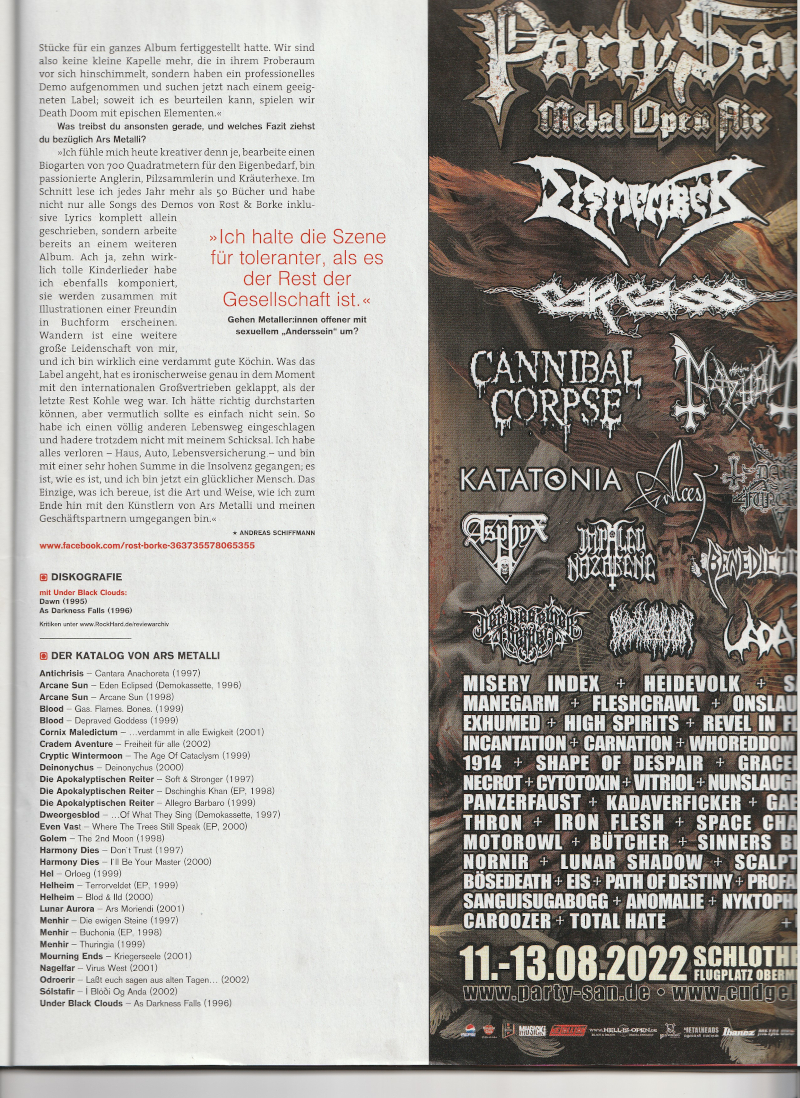