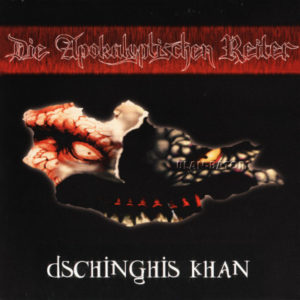 Hardly anyone will have missed the fact that these days mark the 24th anniversary of the release of the groundbreaking Reiter 7″ “Dschinghis Khan”.
Reason enough to celebrate with a dignified interview.

Volk-Man, greetings.
How did you come up with the idea of releasing a snappy four-tracker between the enormously successful debut album and the eagerly awaited second album?

The starting point was the cover version of “Dschinghis Khan”, which we had rehearsed at some point in the rehearsal room and which also went down very well at live shows.
It had a certain “horse theme”, so Mongols, horsemen, Genghis Khan, world conquest etc. — all things that somehow interested us. — all things that somehow interested us. The song has a certain metal attitude even without our cover version. So, no sooner said than done, the song had to be recorded and since it wasn’t worth the effort for just one piece, we directly recorded three more songs.

Andreas Hilbert lives a bit away from you; did you travel all the way to Berlin to record the song, or were you just in the area?

The journey took almost 8 hours because the VW band bus had a problem with the cooling system. Somehow air got into the cooling system and the engine threatened to overheat. Therefore, the drive towards Berlin was accompanied by 4 longer breaks, where we simply had to wait until the engine had cooled down again, then we continued at a snail’s pace for 30-50 km.
Dr Pest was the only one who was really pissed off by the whole thing – firstly, it was his bus and secondly, as the driver, he had to stay sober. Fuchs, Skelleton and I had realised straight away that we’d better pack some proper Martinis when we stopped at the petrol station, several bottles went on the way to Berlin and to be honest I don’t know how the journey ended.
At some point in the night I woke up in Andreas Hilbert’s pad (rather, his fat cat woke me up) and Andreas was ranting (also drunk) in turn about the genius of Carcass, Oxiplegatz and Rhapsody.
The next day was hell, as expected. Being completely hungover in the studio is generally not a good idea.
Skell was still so wiped out that he was virtually unable to keep half a beat – which was already killing Andreas.
Dr. Pest and I tried to repair the bus during his drum recordings, but we had to find a slope so that the air bubble in the cooling system could move towards the slope and escape from the air release screw, while water was poured into the radiator at the back. The VW Boxer engine in the rear of the bus was extremely difficult to access and the whole operation took hours. Afterwards, just for fun, we did a push-up competition until our arms and shoulders burned and hurt. A really stupid idea when you have to play guitar and bass shortly afterwards and there are 16 tons hanging from each arm.

Very entertaining, thanks for the story!
The artwork is killer, also the backside. Who was responsible for that?

It’s all stolen from a Marvel comic. Back then, without the internet, that wasn’t so dramatic, because who in the USA was supposed to notice when a small East German underground band wanted to save a bit on the graphic designer and used Marvel’s beautiful collection?
Well, in a way it was also a tradition that we didn’t care so much about the copyright of the artwork, “Firestorm”, “Soft & Stronger” and also “Allegro Barbaro” were similarly “charmingly borrowed”. But in the end, in the good cause of the Reiter, no one ever sued for that either.

Can you still remember how the three original compositions came about? Did your songs form more during jamming back then, or did one arrive with largely finished songs and lyrics?

“Dance with me” was already composed for the upcoming album “Allegro Barbaro”, “Human End Part II” was a piece that could have been on “Soft & Stronger” but ended up not being on the album. “The Price Of Ignorance” was an experiment, because we played with a lower tuning of the guitars than usual. Normally we had tuned down from E to D, but for this song we tuned down from E to A. It suited the song quite well. This suited the piece quite well, but in the end it was a bit “too much”. On “Allegro Barbaro” everything was tuned to “D” again…. From “All You Need Is Love” on we found a good middle ground – we tuned down to “C” and since then this has been our standard tuning for all albums after that.

Thanks for these insights!
For Legacy (or Deftone?) there was once a kind of crossfire with track guessing in the car of a legendary label man. Dave Ingram and Peter Tägtgren were very taken with your music.
Were you already aware at that time that you would take off completely?

Oh, that’s the first time I’ve heard that. But it’s good to know. Taking off is always something you can only see in retrospect, if you want to.
At the moment it always felt more like small steps – but they always went persistently in one direction. To be honest, there was never such a moment of a huge explosion where suddenly 1000 people came to the shows instead of 100.
It was more like a slow step-by-step process, first 200, then 250, then 300 and so on. – I think the most important decision was to give the band the space it needed in your life.
We knew that you had to get beyond the “amateur band” stage if you were really going to continue to be serious about your career.
I think with the signing to Nuclear Blast in 2003 and the planning certainty of always having a good budget for studio recordings for the next few years, the time started when we all quit our jobs and just made music. We just played every tour and every show that was possible and from hindsight I would also say that by the release of “Riders On The Storm” we had brought the band to an economically viable level that allowed five people to live an existence as professional musicians. That’s why you still had to use water instead of bubbly to make coffee, but I remember very well that feeling of looking after yourself, not having a boss and having a sense of personal freedom that I never knew before.

I imagine that’s really great, lifelong congratulations on that.
Is this actually the only Ars Metalli release that has a year on it that actually matched reality?

I honestly don’t know, haha. But it’s nice that the EP was actually released between “Soft & Stronger” and “Allegro Barbaro” as planned, because it was supposed to be a kind of interlude.

There was an edition in red vinyl and then another black one. But that wasn’t planned, was it?

The red edition was sold out so quickly that we had to do another one. We never expected that, of course.

Does Ralph Siegel know this version of his world hit?

I don’t think so.

Do you still play live songs from the record today? And have you ever played in Mongolia?

We played “Dschinghis Khan” live for the last time in 2010. Things got a bit out of hand, because it seemed that some fans only came to the shows to chant “Dschinghis Khan, Dschinghis Khan” over and over again from the first to the last song – that got on our nerves so much that we pulled the ripcord.
Instead, we played “Ghostriders In The Sky” by Johnny Cash (actually, the song wasn’t written by him, but his version is considered the original by many).
The song also had a certain horse romanticism. It has been much more successful than D.K. – even today, this cover version of ours is always in the Top 5 of the most played equestrian songs on Spotify, etc. – and has been for years.

Unfortunately we never made it to Mongolia, but we dreamed of it many times. Since tours to Russia are probably out of the question for the near future, I honestly don’t think I’ll be making my long-planned trip to Beijing on the Transsib in the near future.
A stop in Mongolia was firmly planned and I would certainly have taken along a “Dschinghis
Khan” EP and buried it in the sacred Mongolian steppe. (Just brilliant – m.) But somehow I will surely manage that one day.

You like to listen to the music from the early days, don’t you? I find it incredibly charming.

Maybe once a year. Mostly in the course of doing interviews where it’s about the past. Or when I wrote the band bio – 20 years of D.A.R.. The old music probably also serves as a catalyst for your own brain, because the old music makes you remember things that seem like a long time ago. The rough, chaotic and, from today’s point of view, sometimes somewhat strange way of composing always strikes me.
But Skell always had the motto that there should be no parts where you have moderate passages for more than 30 seconds before you bludgeon and play blast beats again. In this respect, our songwriting was always a bit in the “bludgeoning corset” back then. But yes, it’s absolutely authentic and very charming.

For me, “Soft & Stronger” in particular is also a life-accompanying soundtrack for new beginnings.
From the very first bar, the album radiates unbridled optimism and joie de vivre.
And with that the interview ends, and I say
THANK YOU!