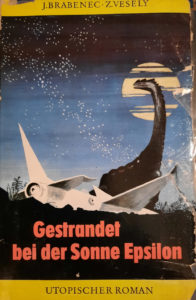 I read quite a lot of books, but in order to create a personal speciality for myself, some time ago I discovered the field of “Eastern European (incl. GDR) science fiction literature up to 1990”, an interesting and rich subject.
One of the most exquisite publications of this subgenre is undoubtedly “Stranded by the Sun Epsilon”, a Czechoslovak book from 1961.

Actually, the group of space travellers is supposed to search for the traces of a lost expedition on a still nameless planet of that sun, eleven light years away from Earth – but then gets into trouble themselves and has a serious accident.
The only way to survive is to break away from the doomed mother ship in a small space glider and land on the planet.
Due to the limited carrying capacity, only the bare necessities can be taken along, and when this vehicle is also wrecked and the rescue chutes have to be used, everyone only has what he/she is wearing.
In addition, the community is divided into a larger group of about 20 people and a smaller one of only three, who end up far behind the next mountain range.
Whether they survive at all is not known.
The larger group, as we soon learn, makes an emergency landing on the planet’s surface, halfway safe and sound, and, since this celestial body has quite Earth-like conditions, is also confronted with a fauna and flora similar to the Earth’s primeval period (Tertiary / Quaternary).
There are two sides to this paradise, namely an overflowing, untouched and food-giving nature, but also powerful and dangerous animals.
The very earth-like biology may seem a little exaggerated, but it doesn’t carry any weight, and in itself I find the concept of convergent evolution absolutely coherent.
What is particularly interesting is the evolution of the technology of the settlers, who fortunately all enjoyed an above-average education.
Thus the path from the pointed stick to the forge is described in a rousing and comprehensibly realistic way, with a dash of dry humour.
The situation is quite different for the remaining space travellers – one woman, two men – who land far away on the backside of the mountain range.
Only three of them, without anything and close to the end, they are confronted with an approaching winter in the mountains, which they apparently have to spend in a cave without a fire.
How will it all end?
Finding out won’t be cheap, because the book is rare and usually costs between 30 € for a somewhat damaged or slightly soiled edition and almost 100 € for a first-class one.
The damaged one will do, of course, and is absoutely worth every penny.
An interesting feature: everyone I know who has read this book and (unlike me) has owned it since childhood reads it over and over again, often regularly every few years.
Quite understandable.
My thanks to Frank for this recommendation!